Anger Management, Emotional Regulation, and Its Relationship to the Tactile System 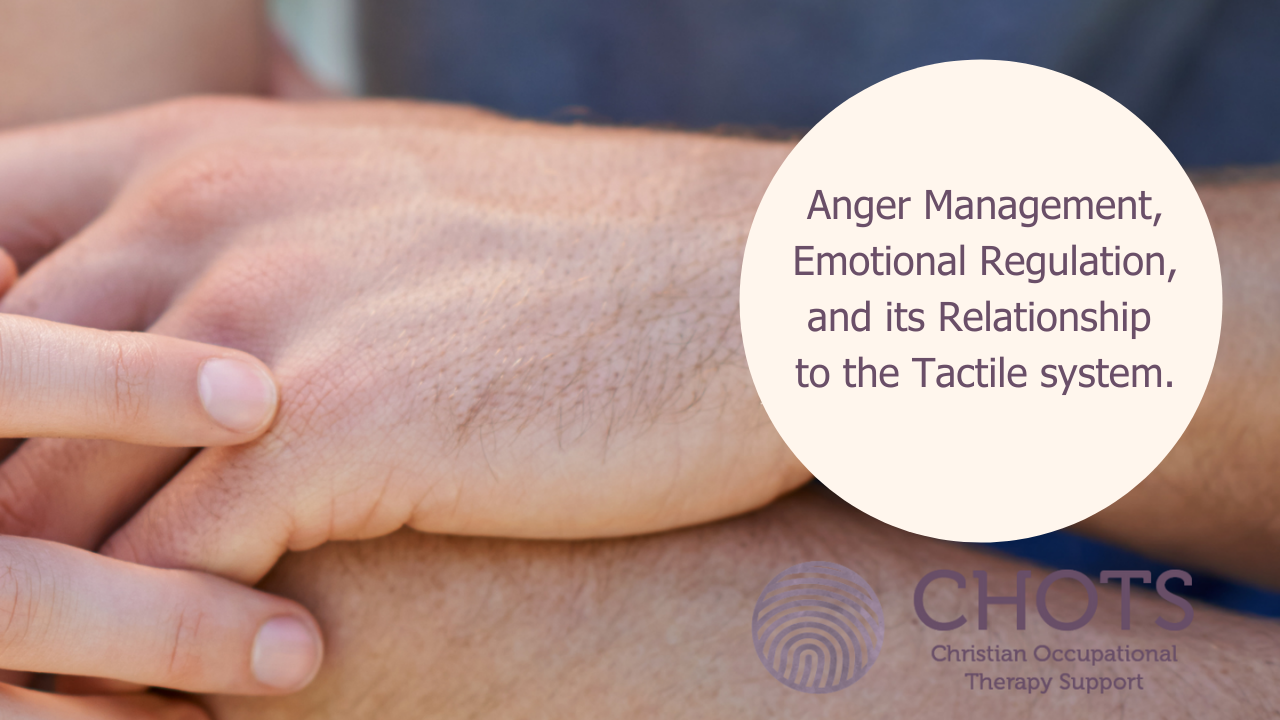 Anger Management, Emotional Regulation, and Its Relationship to the Tactile System.

Everyone gets angry sometimes. Adults can usually express their anger as well as the source of it, but for children, it’s not always so easy. What’s even more mystifying is if your child seems okay one minute, then extremely angry the next. What is causing such dramatic changes in their mood?

One such cause of emotional outbursts in children is tactile defensiveness, otherwise known as over-reactivity or over-responsivity. Common in but not exclusive to children with autism, tactile defensive patients are sensitive to textures in food and the clothing they wear daily as well as physical affection.

In today’s post, we’ll explain anger management’s connection to the tactile system and emotional regulation. We’ll also discuss more signs of tactile defensiveness so you can identify it in your own child as well as offer some suggestions for treating or at least alleviating the anger that may stem from this disorder. If the neuro science is not your thing, then just skim read that and get to the good stuff below!

To understand more about where this unregulated anger in your child may be coming from, it helps to explore the spinothalamic tract, anterolateral system, and their relationship with the brain’s limbic areas.

The spinothalamic tract continues to the spinal cord, with somatotropic organization divvying up each area of the sacral, lumbar, thoracic, and cervical spine.

According to this 2020 report, the spinothalamic tract connects to the cerebral cortex through dorsal root ganglions on either side of the spinal cord. The limbic system oversees olfaction, long-term memory, motivation, behavior, and importantly in this context, emotions.

At the edge of the cerebral cortex are the hippocampus and amygdala. The hippocampus regulates learning and spatial memory, so while it’s impactful, the hippocampus is not what we’ll focus on for the sake of this article. Instead, we will discuss the amygdala.

The social processing that occurs in the amygdala allows us to evaluate the faces we see of the people we meet in our day-to-day lives. It’s believed by some researchers that the amygdala could even help us determine the trustworthiness of a person by assessing their face.

By damaging the amygdala, your ability to feel betrayal and trust may be shaken up, causing you to trust in the wrong individuals. Specifically, amygdala lesions could lead to a condition known as Kluver-Bucy syndrome, named after the physiologists who researched the topic.

With Kluver-Bucy syndrome, monkeys believed to have had severe temporal cortex damage experienced very strong sexual drives, an inability to remember things for long, childlike curiosity about almost anything, and a lack of fear. The monkeys would also put anything they could in their mouths, including nonedible items.

Your episodic-autobiographical memory or EAM networks can also be impacted by damage to the amygdala. Unlike the hippocampus, which manages spatial memory, the amygdala holds onto EAM memories and makes emotional event cues from these memories.

Thus, it may make sense that a child’s sudden emotional veering from responding normally to suddenly getting angry could have something to do with the amygdala.

The autonomic nervous system oversees such daily bodily functions as sexual arousal, urination, pupillary response (the dilation of your pupils), respiratory rate, digestion, and heart rate. As you likely know, many of these functions are automatic without us having to do anything.

For instance, when we go to the toilet, digest, salivate, or undergo lacrimation (shed tears), these are all functions of the parasympathetic nervous system.

We need both the sympathetic and the parasympathetic nervous systems to feel strong emotions and then calm down from those emotions.

Just imagine if you were angry all the time. Not only would this be damaging to your social relationships, but to your health as well. Your blood pressure and heart rate would be elevated more than usual. You might breathe harder and more often, and your ability to concentrate and focus would be nonexistent because you’d be so preoccupied with your anger. Your body would also burn though tremendous amounts of energy to sustain you in this state.

It’s not feasible for anyone to remain angry all the time, which is why the parasympathetic nervous system is so important in day-to-day life. Thanks to this part of our nervous system, we can calm down, renew normal bodily functions, and spare some of our energy so we can get through the rest of our day after an angry episode.

Children who are expressing sudden angry, emotional outbursts may have a dysfunction of the sympathetic nervous system, typically the autonomic nervous system. Known as dysautonomia, this dysfunction can indeed cause the situation we described above where it feels like you can’t stop being angry. You may sweat more, your blood pressure is elevated, and your heart rate is higher than it should be. Worse yet is this is all involuntary, so it’s not like you can calm yourself down via the parasympathetic nervous system.

What Activates Anger in Children? The Tactile System and Anger

Causes of Anger in Children

Having a firmer grasp on what makes children angry could be another useful means of learning more about why your child is lashing out emotionally. According to the Helpful Counselor, feelings of anger in children are usually caused by a different, more underlying emotion. For instance:

The American Psychological Program notes that causes of anger differ in children by their age. For instance, babies that are zero to 18 months old may get angry if they’re tired, disturbed by a sudden sound, or hungry. They will cry to express their unhappiness.

Toddlers 18 to 36 months old will throw tantrums and cry. They do this when they can’t regulate their emotions, can’t verbalise how they feel, don’t want to share a physical item, or when attention is taken away from them.

Children 3 to 5 years old at the preschool age can act aggressively in addition to crying and throwing a tantrum. They get angry because they think their ideas are the only correct ones, they have to share their possessions with others, and/or they still can’t quite verbally express themselves.

Older children 6 years and up now understand feelings of being misunderstood, discriminated against, punished, and rejected. They can verbally express themselves and may turn to bullying if they feel angry enough.

How the Tactile System Plays a Role in Children’s Anger

We wrote in a recent blog post about the tactile system, also referred to as the somatosensory system. This system regulates proprioception, bodily temperature, pressure, pain, and the sensation of touch. These pathways have a direct impact on arousal and anger issues.

The central nervous system also plays a role, allowing for nerve receptors to distinguish what’s in a child’s environment, including sources of pain, temperature changes, pressure, and surface touches. In most children, all senses operate well, while for other kids, the senses may be heightened or reduced in sensitivity. Some children and young people only have sensitivity in certain receptors but not all.

When a child experiences tactile defensiveness, they could exhibit these symptoms:

You can see by reading the above list how a child with tactile over-reactivity would have a very hard time in their day-to-day life. Some of these symptoms, so to speak, can manifest to look like pickiness to a parent who isn’t aware of sensory processing issues.

The same can go for brushing teeth or not wanting to get dressed in the morning. To you, these can seem like creative excuses to be lazy, when in actuality, the child’s tactile issues makes all the above matters very real to them.

If the child is not old enough to verbalise what they’re experiencing, or if they can talk but they struggle to put into words why clothing tags and sock seams are so uncomfortable, they could just turn to an old emotional standby instead: anger.

So imagine this scenario: you’re out grocery shopping with your younger child. They’ve seemed quiet the whole time, then finally, with only two more aisles to go until checkout, your child has a complete meltdown.

Is it because you’re taking too long at the store? Or maybe because you refused to buy them chocolate? What went wrong?

All sorts of things could have happened if your child has tactile hyper-reactivity. Walking in their shoes could have proven to be too uncomfortable, or someone in the shop brushes passed them, so your child throws a fit. You may have tried to give your child a hug in the other aisle to thank them for their patience, yet this act of affection backfired.

If your child never explains why they’re uncomfortable, then of course these outbursts can seem unpredictable and like they’re happening out of nowhere. Unfortunately, without diagnosing the cause, the meltdowns and anger will continue.

If you suspect your child has tactile over-reactivity that’s triggering their anger, the best thing you can do is take them for an assessment. Through a combination of therapy for the tactile system and the following suggestions and activities, the emotional outbursts can be lessened.

It may feel strange to ask to hug or kiss your child because well, they’re your child, but it’s for their own benefit and thus yours. If your child goes on a playdate or spends a day in the classroom, make sure their teacher and students (if possible) are aware of this no-touching policy as well.

The right clothing will go a long way towards calming a child with tactile over-reactivity. Skip waistbands and belts, buy long-sleeved and tight clothing, avoid tags and liners, and go seamless whenever possible.

Let Your Child Do What Makes Them Feel Comfortable

It’s hard to brush your tactile defensive child’s hair because you never know how much pressure is too much or too little. Your child is much more aware though. Thus, if they don’t already know how, show your child the right way to brush their teeth, their hair, and how to get dressed.

This doesn’t mean you don’t oversee these behaviours, just that you’re not as actively involved.

The deep pressure that weighted items like backpacks, vests, and blankets can create will reduce a tactile defensive child’s anxiety and keeps their muscles and joints stimulated. If you’re allowed to, you can even envelope your child in a big, firm hug to create the same effect.

Your child’s sudden angry outbursts are likely tied to emotional dysfunctions in the brain, sympathetic nervous system, and/or the tactile system.

At Christian Occupational Therapy Support, we can both diagnose and offer treatment for tactile issues and other disorders that may cause your child to act irrationally angry. Do connect with CHOTS  today.

Have your mind put at peace by calling and talking through the challenges of parenting or living with sensory issues. 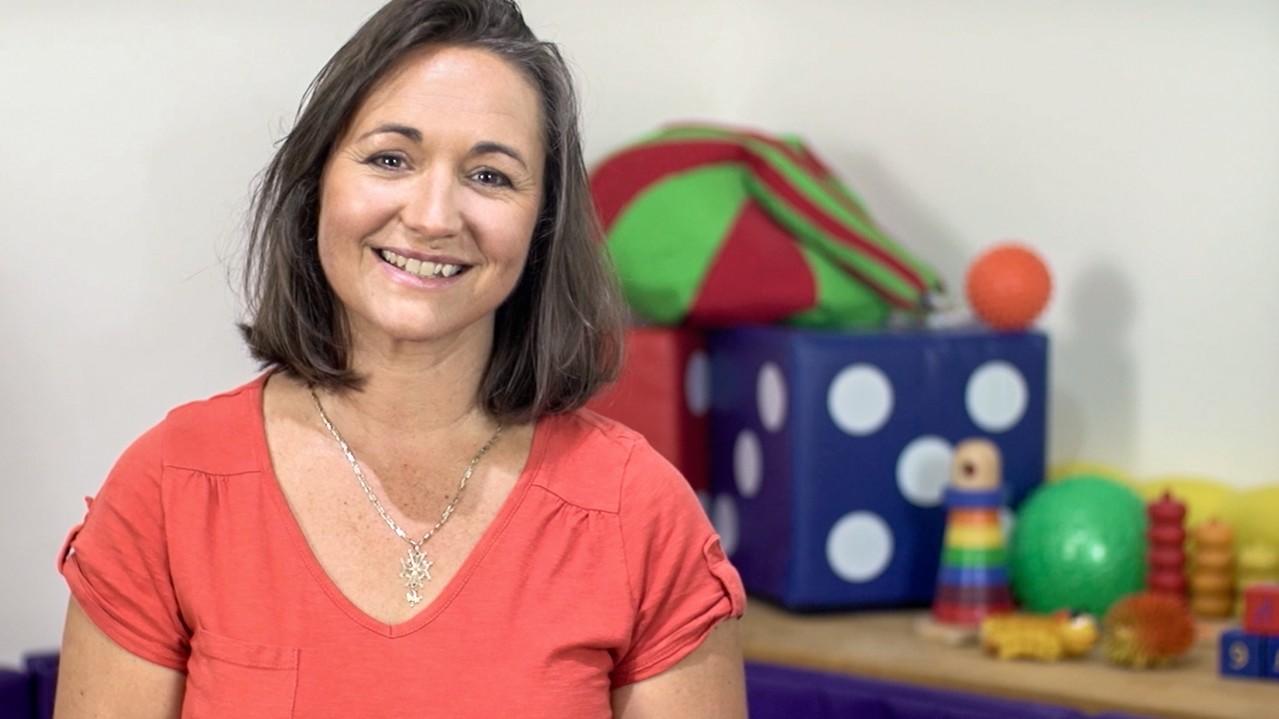 We’ll uncover hidden processes that could be sabotaging all your best efforts. You’ll leave the session renewed with hope for the future, understood, your faith honoured, and inspired to finally put plans into action for your family that will last a lifetime.